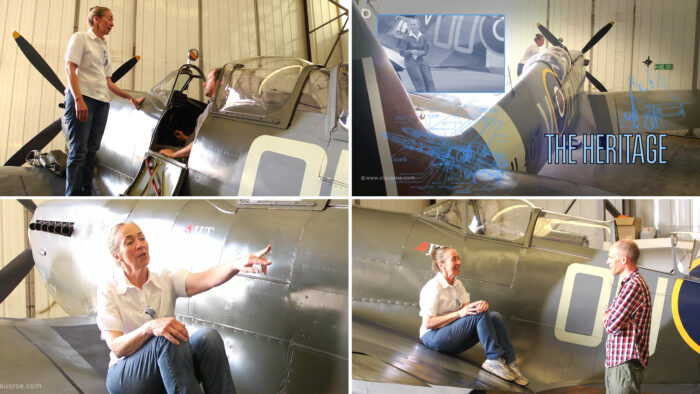 Sad to hear of the passing of one of the figureheads of the aviation world, Carolyn Grace who once gave us at Olaus Roe the amazing privilege of allowing us exclusive access to follow the family's flying season for a programme pilot we had for Channel 4 (who then unbelievably passed on it!)

An announcement was made by Daisy Grace, Carolyn’s daughter-in-law: “It is with great sadness that we must announce that Carolyn Grace has been killed in a car accident on Friday the 2nd of December 2022. This is a traumatic, and unexpected, loss to all of us and at this time we would like to request that you respect the family’s privacy.”

Carolyn had taken on the incredibly onerous task of operating and flying the Grace Spitfire, ML407, after her husband Nick Grace was killed in a car accident in 1988. Nick, an engineer as well as a pilot, rebuilt the Spitfire over five years and first flew it in 1985. ML407 is an historically important aircraft, flying more than 176 operational missions during WWII including combat on D-Day over Normandy.

Carolyn had told the BBC in 2011, ” To keep our Spitfire operational and keep it for the embodiment of my husband I had to learn to fly it. There had to be another Grace in the cockpit.”Carolyn made her first solo flight in the Spitfire in 1990 and went on to earn her Display Authorisation and flew the aircraft at airshows and flypasts. A thrid Grace got into the cockpit when her Son Richard Grace learnt to fly the Spitifre and has since gone on to become one of the world's most respected warbird pilots. He continues to fly ML407 where it is currently operated by 'Ultimate Warbirds'. Our thoughts are with Richard and his family at this difficult time.